VOL. I NO. 7
VERDUN, SATURDAY, MAY 21, 1914 - 2 PAGES
PRICE FIVE CENTS
GREAT BRITAIN DECLARES WAR
London August 4th- London, August 4th- The British foreign minister met with applause in the house of commons today when he announced "If a foreign fleet came down upon the English channel and bombarded and battered the unprotected coasts of France, we could not stand by with our arms folded." Later in the evening came the official declaration that Great Britain is at war with Germany. The foreign minister then stated that two acts by Germany would necessitate British involvement; an attack on the French coast or the movement into the neutral Kingdom of Belgium. It was the later event that roused Britain to war. 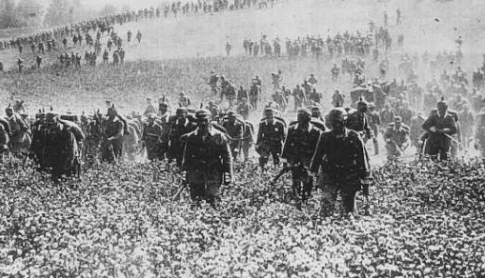 The Kaiser gave an ultimatum to the King of Belgium; either let us pass unencumbered or face us as an enemy. England demanded that Germany cease its antagonism towards Belgium or face a declaration of war. When the Kaiser failed to respond favorably, the English King announced the full mobilization of the British armed forces. With the French navy being stationed in the
Mediterranean, the north coast of France remains unprotected. Britain remains firm in its affirmation to protect the French coast at all costs. Currently, they await only the first strike by the German fleet to retaliate swiftly and forcefully. Throughout the rest of Europe countries have either announced their alignment with one side or declared neutrality. Up until this point there has been a political war waged with verbal threats. From here on out however, it is a war of guns, ships, and airplanes. The cost will no longer be in hurt pride but in human lives.

Verdun Centenary Giveaway
The battle of Verdun broke loose the 21th of Februari 1916 and lasted 300 days. To remember this centenary Verdun is running a 300 hour giveaway.

Every hour we're giving away a steam key. Entering this giveaway is free and only requires you to enter your contact details so we know how to contact the winners. To increase your odds you can share our remembrance on social media.

Don't forget to participate and return to this page every day to maximize your winning chances!
Hourly prize pool

Verdun is a squad-based multiplayer FPS set in First World War(WW1) . The game is inspired by the infamous battle of Verdun in 1916.

The game includes historically accurate features such as true WW1 weaponry, historical maps based on sectors of the Western Front and authentic uniforms and equipment. The game immerses you audiovisually into one of the bloodiest conflicts fought in Europe.

The merciless trench warfare offers a unique battlefield for tactical squad play in the realistic Frontlines game mode, and raw gameplay in the rifle-deathmatch.

The Frontlines game mode is unique in its tactical complexity, where you are levelling different types of squads, each with your own tactics and roles. The realistic trenches are an extra challenge in the fight, where teamwork and tactical cunning are essential for success. Drive your enemies from their trenches and dominate the Western Front!